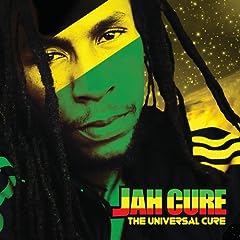 Siccaturie Alcock, P/K/A Jah Cure, is the new High Priest of Reggae. From the age of 3, music reverberated through his small frame and hypnotized the souls of all those who listened to his music.

Jah Cures new album, THE UNIVERSAL CURE, his first recorded album since his release from prison, is scheduled to be shipped worldwide in November, 2008. The first single off that album, Hot Long Time, featuring Flo-Rida, Mavado and Jr. Reid, was recently released in the Caribbean. This collaboration is the first of many for Cure. The album contains collaborations with several artists, crossing the reggae, hip-hop, Latin, and R&B genres. Another single, Mr. Jailer, will be released from The Universal Cure album in the U.S. and Europe in September, 2008. Another track from the album, Journey, is also on the reggae compilation album, Jouney Riddims, now available worldwide on iTunes.

1. Sticky
2. Hot Long Time
3. Reflections
4. Soon Come
5. Buring & Looting
6. My Life
7. Mr. Jailer feat. Phyllsia
8. Freedom
9. Sufferation
10. Journey
11. Forever
12. U Believe In Me
13. The Universal Cure feat. Phyllsia
14. Call Me feat. K. Cole
After serving eight years in jail, Cure was released from prison on July 28, 2007. His goal now is to spread love and to promote peace and healing, universally through his music. He believes his incarceration was Jahs way of teaching him humility, kindness, forgiveness and love for his fellow man. Consequently, he has forgiven all those who have done him wrong, and all those who have judged him unjustly and unfairly.

The album opens with ‘Sticky’, a fun little song which showcases Cure’s unique voice and ability to turn a phrase. The music sounds similiar to some of Marley’s stuff, but Cure’s voice grants the song a depth and power which sets it apart. The second song, ‘Hot Long Time’ features an unneeded opening rap verse and sound effects which take away from the song as a whole, which also includes some work by reggae royalty Junior Reid. (Familiar to some as the voice singing One Blood in The Game’s song ‘It’s Okay (One Blood).’This song is the first single and video from the album and while it’s okay, it’s nothing earth shattering. There are much choicer cuts deeper on the record which better showcase Cure’s talent.

The third song, ‘Reflections’ barely registers as reggae. If not for Cure’s voice, you’d be led to think someone had mistakingly put a modern R&B ballad track on the record. Again, it’s not bad and the lyrics themselves are well written and Cure sings with a somber, melancholy tone which rises and falls against the choir-like back up singers, but its doesn’t sound like reggae should sound. The next song, ‘Soon Come’ is more of the same. Cure’s voice stands out on a very generic sounding backing track. However, after this brief foray into ‘let’s try to have a radio-friendly hit,’ the record really takes off.

‘Burning and Looting’ is a fine example of a modern reggae song. Cure sings of police brutality and injustice, and his strong voice, hinted at in previous tracks, rails against the oppression with sincerity and unfortunate personal experience. The next song, ‘My Life’ is another ballad, but lacks the over production of the earlier tracks. It’s simply constructed with only Cure and an acoustic guitar with a minimum amount of backing vocal. It works in a way ‘Reflections’ and ‘Coming Soon.’ did not.

The CD is a well-worn listen that took me several days to pick out every nuance. It goes off the wall with its message of forgiveness and attempts to heal the global mind. A lot of the time it just sounds like an old school reggae album. I’m not a huge fan of the musical genre, but I’m impressed by what I’ve heard so far. I’d recommend it as a cautious buy.